An embryo on the 5th or 6th day of culture. This is made up of hundreds of cells in an organised way with a mass of cells that forms the baby surrounded by a shell of cells that will form the placenta.

A blastocyst is the scientific name for the rapidly dividing and developing ball of embryonic cells that forms on the 5th or 6th day of development. 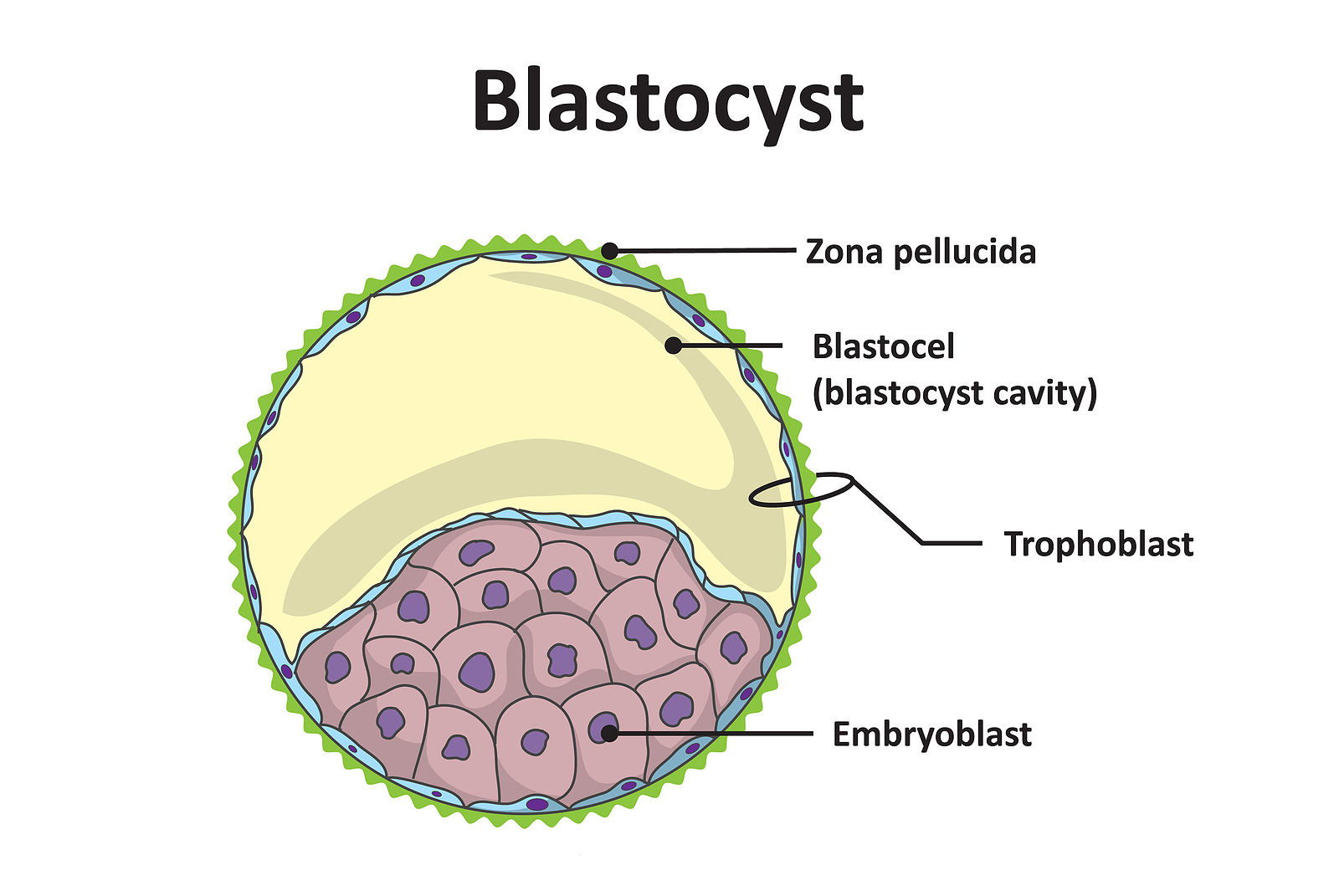 This name is given to the fertilised egg once it starts to form a fluid-filled “blastocoelic” cavity.  At this stage, the blastocyst will have both an outer layer of cells (which is also called the trophectoderm) and an inner group (the “inner cell mass”). The trophectoderm will be one cell thick most of the way around, apart from the one area that contains the inner cell mass, where it will instead be several cells thick. This makes the blastocyst appear as a hollow ball of cells.

Altogether, a blastocyst will usually be composed of between 50 and 300 cells, with a diameter of around 0.2 to 0.3 mm.

The inner cell mass of a blastocyst will eventually become the embryo itself. Meanwhile, the trophectoderm will become the placental cells that nourish and protect the foetus as it grows.  Some of the cells from the placenta will develop into an outer layer of membranes around the developing blastocyst (chorion). Others will become the inner layer of membranes, which form the amniotic sac that the foetus grows within.  The trophectoderm, placenta and sac are also known as extraembryonic tissues.

The placenta will produce several hormones that help to maintain a pregnancy, including human chorionic gonadotropin (hCG), which prevents the ovaries from releasing more eggs and stimulates them to produce oestrogen and progesterone. It will also carry oxygen and nutrients from the mother to the foetus, and waste materials from the foetus to the mother.

In a typical pregnancy, a fertilised egg will develop into a blastocyst as it travels along the person’s fallopian tube, towards the uterus.

It is understandable if you are not familiar with the different stages between an egg being fertilised and said egg becoming an embryo. Each is subtle and only takes a few days, but all have their differences.

The key difference to note between the terms “embryo”, “blastocyst” and “foetus” is the developmental stage at which the fertilised egg has reached.   An embryo is formed once an egg is fertilised, and the embryo should eventually develop into a blastocyst after 5-6 days, during the stage known as the blastulation stage.  A foetus will only form once the blastocyst implants itself in the uterine wall and starts to grow.